You are here: Home1 / Boiler Blog2 / Boiler Installation3 / What Is a Condensing Boiler? 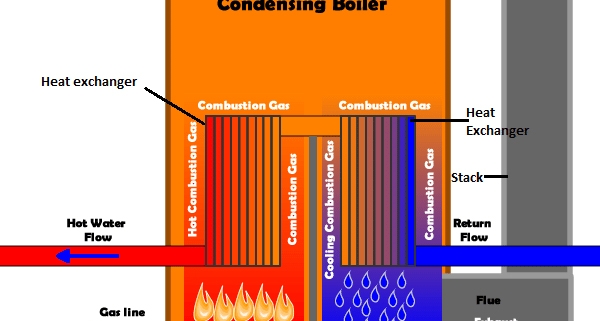 Condensing boilers are water heaters that are typically powered by natural gas, propane, or oil. They produce high efficiency, often higher than 90%, by condensing water vapor in exhaust gases and recovering the latent heat of vaporization that would otherwise be completely lost. This condensed vapor exits the system as a liquid through a drain pipe.

How do they work?

In a traditional gas boiler, fuel is burned, and the hot gases produced travel through a heat exchanger, where much of the heat is transferred to water, raising the temperature of the water.

Water vapor is one of the hot gases created during the combustion process as a result of the fuel’s hydrogen component being burned. A condensing boiler recovers additional heat from waste gases by condensing this water vapor to liquid water, recovering its latent heat of vaporization and boosting efficiency by up to 10%-12%. While the efficiency of the condensing process changes depending on the temperature of the returning water to the boiler, it is at least as efficient as a typical non-condensing boiler.

The resulting condensate is somewhat acidic. At high temperatures, the most often used materials are aluminum alloys and stainless steel. Plastics are the most cost-effective in low-temperature environments. Condensate generation needs the installation of a heat exchanger condensate drain. This is the main difference between a condensing and non-condensing boiler in a typical installation.

Condensing boilers may reach up to 98% thermal efficiency, compared to 70-80% for traditional systems. Typical models have values of approximately 90%, putting most brands of condensing gas boilers in the top available energy efficiency category. In North America, they are usually awarded an Energy Star certification.

The efficiency of heat transmission determines boiler performance, which is heavily dependent on boiler size/output and emitter size/output. The design and implementation of a system are essential. The total efficiency of the water heating system is determined by matching the radiation to the boiler’s BTU/h output and taking into account the emitter/radiator design temperatures.

One factor for the efficiency reduction is that the heating system’s design and construction give return water temperatures to the boiler of more than 55°C, which avoids significant condensation in the heat exchanger. Natural Resources Canada also recommends measures to improve the efficiency of these boilers, such as integrating space and water heating systems. Some boilers have the ability to switch between two flow temperatures, around 63°C and 84°C. By default, boilers are set to the greater flow temperature. However, even with partial condensing is more efficient than a conventional boiler.

Simple control modifications might push most non-condensing boilers to condense. The corrosive nature of the condensate; however, would soon corrode any soft steel or cast-iron components of a traditional high-temperature boiler, reducing fuel usage significantly and damaging the unit. As a result, the majority of condensing boiler heat exchangers are composed of stainless steel aluminum alloys. Non-condensing boilers can be modified with external stainless steel economizers to obtain condensing efficiency. To minimize thermal shock or condensation inside the boiler, temperature control valves are used to mix hot water into the return.

The condensate released from a condensing boiler is acidic, with a pH ranging from 3 to 4. Condensing boilers need the installation of a drain line to collect the condensate produced during operation. This is usually a short of polymer pipe with a vapor trap to keep exhaust gases from reentering the building. The acidic nature of the condensate may corrode cast iron piping, sewage pipes, and concrete flooring, but it poses no health danger to the residents. To elevate the pH to appropriate levels, a neutralizer, generally consisting of a plastic container filled with marble or limestone aggregate or alkaline chips, can be used.

The main and secondary heat exchangers are made of acid-resistant materials, generally aluminum or stainless steel. Because the final exhaust temperature of a condensing boiler is significantly lower than that of an atmospheric boiler (38°C vs. 204°C), a mechanical fan is always required to forcibly remove it, with the added benefit of allowing the use of low-temperature exhaust piping, typically PVC, in domestic applications without insulation or conventional chimney requirements.

Want to join the discussion?
Feel free to contribute!

The World Is Facing A Looming Cold Crunch
Scroll to top